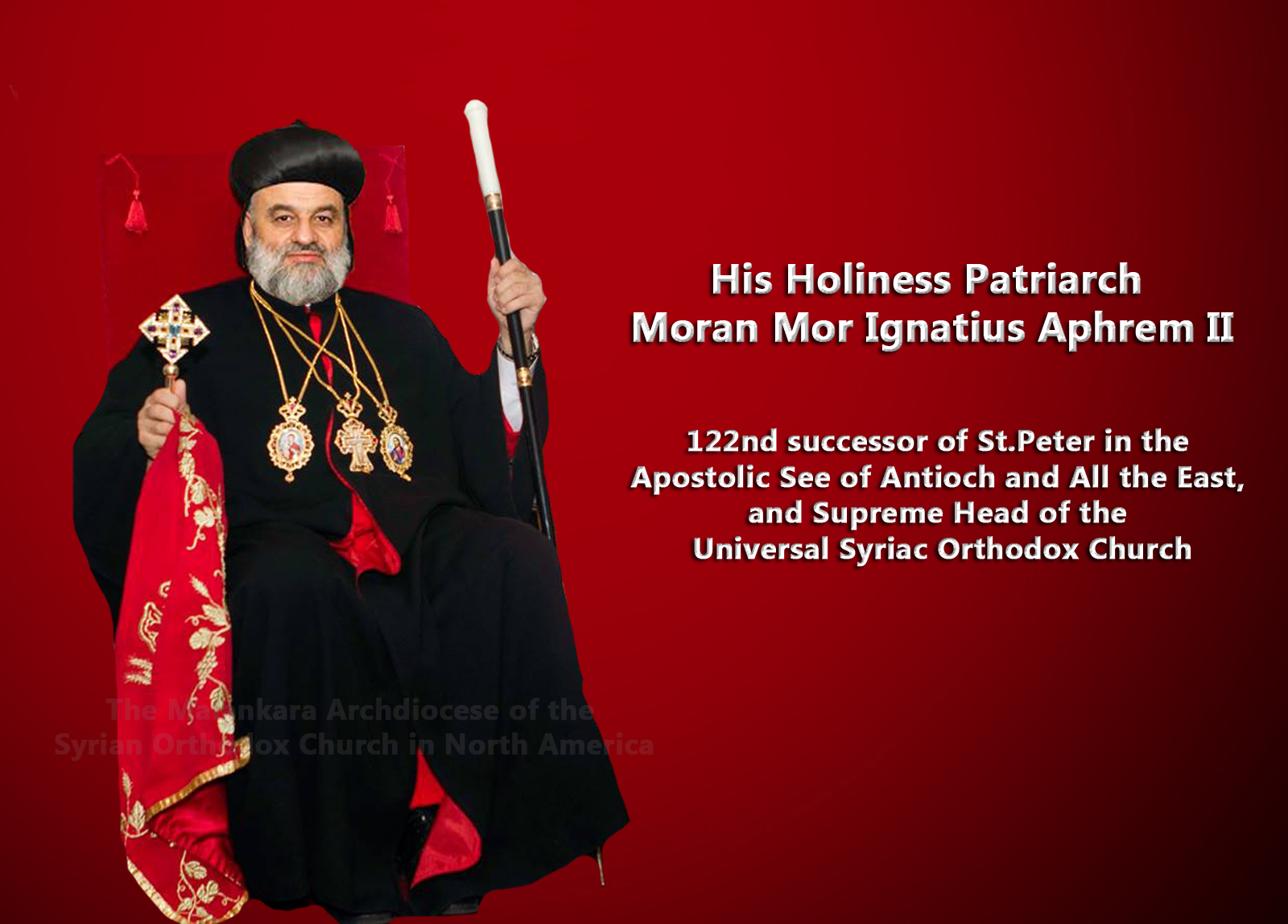 Moran Mor Ignatius Aphrem II, the 122nd successor to St. Peter in the Apostolic See of Antioch, Born in Kamishly, Syria on May 3, 1965, the youngest son of Mr. & Mrs. Issa Karim, His Holiness lost his father at an early age and was raised ,with the rest of his family, by his late and loving mother Khanema. He entered St. Ephrem’s Theological Seminary in Atchaneh, Lebanon in 1977, following his primary schooling in Kamishly. In 1982, His Holiness served the Syriac Orthodox Archdiocese of Aleppo, Syria, for the next two years. From 1984 to 1988, as Archbishop Karim he pursued higher studies at the Coptic Theological Seminary in Cairo, Egypt, graduating with a Bachelor Degree of Divinity.


In 1985, His Holiness took the vows of a monk, and put himself in the service of the Church. He was ordained to the diaconate in Egypt, and later the same year, to the sacred priesthood in Kamishly. From 1988 to 1989, His Holiness served as both, the secretary of the late His Holiness, Moran Mor Zakka I Iwas, Syrian Orhtodox Patriarch of Antioch and all the East, and as a teacher at St. Ephrem’s Theological Seminary in Damascus, Syria. In 1991, He entered St. Patrick’s College in Maynooth, Ireland, where he received a License of Sacred Theology Degree, in 1992, and his Doctor of Divinity Degree in 1994, following a defense of his doctoral thesis on The Symbolism of the cross in early Syriac Christianity.

On Sunday, January 28, 1996, Hewas consecrated as Metropolitan and Patriarchal Vicar to the Archdiocese of the Syriac Orthodox Church for the Eastern United States, by His Holiness Patriarch Zakka I Iwas, at St. Mary ‘s Syriac Orthodox Church in Kamishly. Archbishop Mor Cyril Aphrem Karim arrived in The United States on March 2, 1996, and was officially installed to his position at St. Mark’s Cathedral in Teaneck, New Jersey.

In addition to his many talents, Archbishop Karim is fluent in both Classical and Vernacular (Touroyo) as well as in Arabic, French, and English.
During his years as hierarch of the Archdiocese of the Syriac Orthodox Church for the Eastern United States, His Eminence, Mor Cyril Aphrem Karim has overseen the establishment of several new parishes:

Throughout the years, he has visited, on a regular basis, all the parishes, and formed a new Archdiocese Advisory Council to assist with the administration of the Archdiocese and its various programs; working closely with the parish boards and clergy to see that the spiritual and church needs of the faithful are fulfilled.

He had a special concern for the youth of the Archdiocese; in his first year as an Archbishop, he established the Syriac Orthodox Archdiocesan Youth Organization (SOAYO), which coordinates the ministry of all youth organizations of the parishes of the Archdiocese. His commitment to them was shown right from the start, when he immediately held a number of youth gatherings and conferences, as well as being instrumental in establishing an Archdiocesan Scholarship Program to benefit the students. He shared the youth with the Church’s deep concern for them, and fielded many questions related to faith and other specific concerns they had. He encouraged them to do their best to work together as one family for the growth and advancement of the Holy Church. He, likewise, helped organize Annual Youth Retreats throughout the Archdiocese, for both younger and older youth. He was also responsible for the creation of a special Monthly Youth Liturgy, to bring the young people of the various parishes in the New Jersey/New York area, to give them a chance to participate fully in the Eucharistic Celebration. Consequently, He called for the establishment of the Archdiocesan Choral Society, comprised of musically talented children from different parishes of the Archdiocese.This group performed in several concerts and produced two Hymnal recordings; one for Christmas and the other for Maundy Thursday Service.

The Syriac Orthodox Scouts of America is another organization of the youth that is dear to His Holiness’s heart, and he does his best to attend to encourage them.

Likewise, He showed his great concern to the adult members in our community. Under his guidance and leadership, a Pre-marital Counseling Program has been created in the parishes of the Archdiocese, to help young people prepare for their Christian married life. This includes an opportunity for them to meet with His Eminence and local clergy, to discuss matters of common concerns, that help assure lasting and successful marriages.

He also realized how important is to respect and honor the elderly. In this regard, he established an Annual Elderly Liturgy Service, that brings together the elderly members of local parishes to share in the Celebration of the Lord’s Supper, and to spend a special time of recognition and appreciation.

In the field of education, He blessed and encouraged the establishment of the Archdiocesan Sunday School Committee; a body of Sunday School principals and teachers, who had been working together with His Eminence and local clergy, in the creation of a Unified Sunday School Program for the parishes. As a result of the Committee’s outstanding efforts, a series of unified lesson plans and materials have been prepared, and have proven invaluable in helping to introduce students to the Orthodox faith and traditions of the Holy Church.

Moreover, His Holiness, has been responsible for the publication of a series of books and articles related to the Church:

His Holiness encouraged the American Foundation for Syriac Studies to publish several issues of a quarterly entitled “Syriac Studies”, and helped in co-sponsoring a series of public lectures by outstanding scholars on Syriac Theology, culture, history, and literature.

His Holiness has also established himself as an ecumenist, very much concerned about Christian Unity. He has served on both, the Executive and Central Committees of the World Council of Churches, attending the 1991 Canberra, Australia WCC General Assembly, the 1998 WCC General Assembly in Harare, Zimbabwe and the 2006 Assembly of Porto Alegre, Brazil, as a member of the Syriac Orthodox delegation. Moreover, he has been an active member of the Executive and Governing Boards of the National Council of Churches of Christ in the USA, and he also serves as a Vice- Chairman of the Standing Conference of the Oriental Orthodox Churches in America. In recent years, His Holiness has been instrumental in the establishment of a new and promising ecumenical body, Christian Churches Together in the USA, of which the Syriac Orthodox Church is a founding member. In all his ecumenical activities, His Holiness has most capably represented the Holy Church and has won the admiration and respect of his colleagues and confreres. 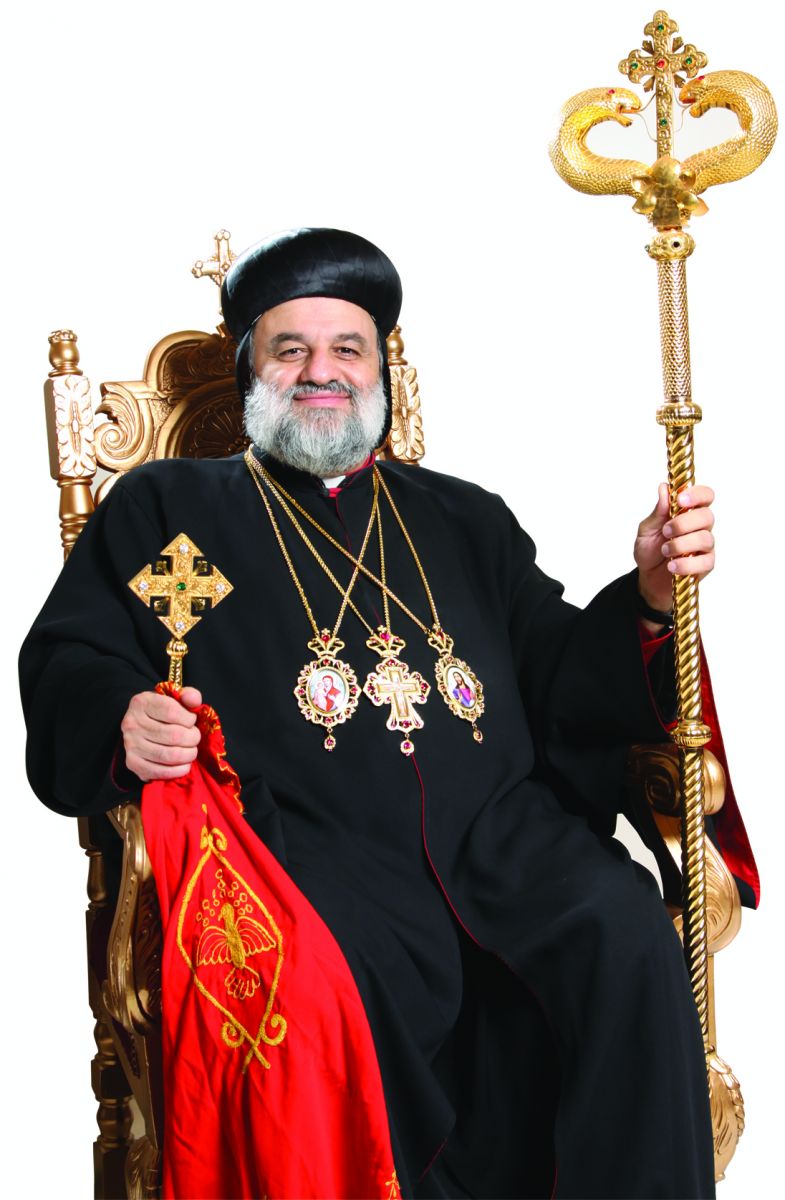 Patriarch of Antioch & All The East